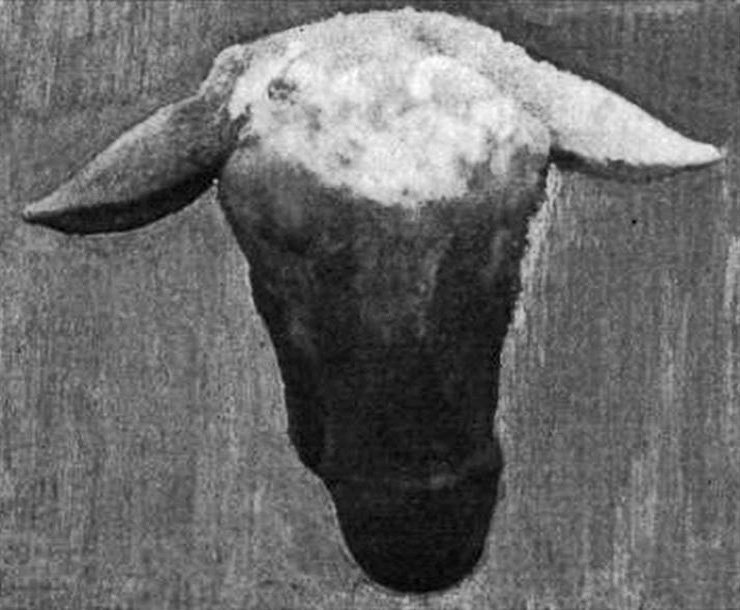 Cattle, sheep, and goats can all develop scurs.  In goats, however, scurs are actually true horns that have been damaged in a bad disbudding job.  In cattle and sheep, scurs are merely inherited growths.  The difference can be felt in mature animals; horns are firmly attached to the skull, while scurs are fairly loose.

In addition to the Sc gene, Rambouillet sheep have a similar scurring gene called Sr.  In this breed, both rams and ewes have scurs if they have at least one copy of the Sr gene.

Finally, Suffolk sheep, normally polled, may appear to have scurs.  In this breed, the scurs are actually true horns that have been stunted by interaction with other genes.

There is no definitive evidence that goats inherit scurs.  Instead, scurs on goats appear to be the result of incompletely removing horn buds during disbudding.  If any horn tissue is left alive and in place, it will grow back in the form of a scur.  Bucks, in particular, are prone to scurs due to the influence of hormones.

To avoid this problem, make sure the disbudding iron is thoroughly heated before use.  Disbudding should be done at a young age, while the iron can easily fit around the horn buds.

While not all scurs are a problem, some certainly do cause difficulties for both the animal and the owner:

Scurs can be banded to cut off the blood supply.  They will eventually fall off, only causing discomfort the last few days.

Small scurs can also be cut off.  This can be painful, however, and care must be taken to seal off the blood vessels with a hot iron.

If you don’t mind routinely trimming scurs, you can also settle for a temporary solution.  Use a wire saw to remove a small part of the scur, making sure that you do not remove enough to cause bleeding.  Goats with small scurs may keep them ground down themselves if provided with a rough, sturdy surface to rub on.  Just bear in mind that they will continue to grow back.

In sheep and cattle, the prevalence of scurs can be reduced in the flock or herd through selective breeding.  This is done by culling all scurred animals.  If the scurred animal is a female, both of her parents can safely be culled, as well, since they both carry the gene.  Note, however, that the culling process will be more complex in Rambouillet sheep, as both the Sc and the Sr genes must be eliminated.  Also, not all Rambouillet sheep that have produced a scurred ewe can be culled, since the ewe might have inherited the Sr gene from only one parent.

Of course, breeders must keep in mind that they may be sacrificing more valuable traits by eliminating scurred livestock.

Getting Started with Draft Animals on a Budget