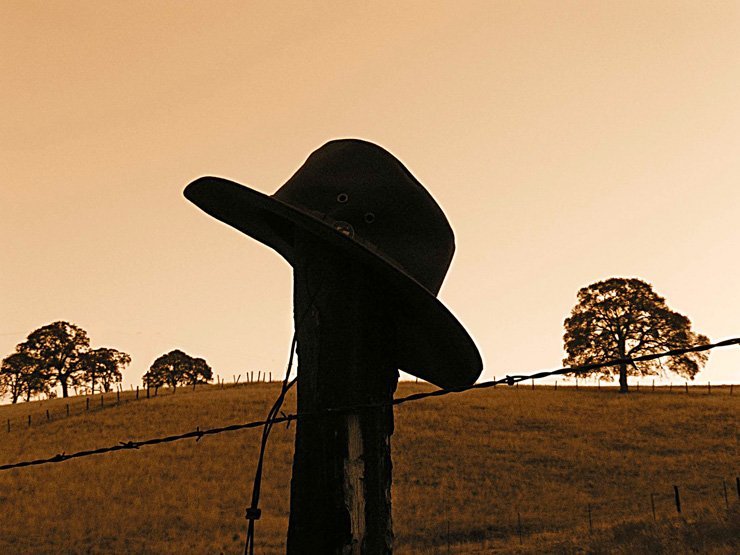 The early cowboys seem to have been artists at heart.  Every aspect of their daily lives seems to have made it into verse, from their love of nature to their battles with wild horses to their prosaic bacon-and-beans diet.

Many of the first cowboy poems were song lyrics.  Thus, this poetic style shares the same cultural origins as Western music.  The ballad form of the British Isles became a key feature early on.  The repetition and sense of rhythm popular among black cowboys did, as well.

That said, cowboys did not always set their verses to music.  Recitation was a popular pastime all over America in that day.  Often at night, the cowboys would simply enjoy reciting and listening to recited poetry, copying the example of their acquaintances back East.

A Range of Topics

Cowboy poetry primarily deals with the West.  Long-standing favorite subjects have been cattle chores, love-hate relationships with horses, observations on nature, religious musings, and thoughts of home and family.

As the West has evolved to fit the modern era, so has cowboy poetry.  Favorite topics today include everything from politics to the woes of adapting to new technology, but the traditional ranching flavor will remain as long as the cowboy way of life does.

In the days of the cattle drives, cowboys had to find ways to pass long nights on the prairie.  One favorite was swapping yarns.  Ever since, telling a story that can evoke a laugh, a thrill, or a tender sentiment has been a key goal of cowboy poetry.  The method of concocting the story varies by poet.  Some prefer to stick to the facts, especially if offering a historical narrative, but the tall tale still rides on today.

The poems that tended to last the longest were those that could be memorized the easiest.  Cowboy poetry was frequently published in newspapers, but recitation was at least half the fun.  Here is where the African-American influence proved to be extremely helpful.  A definite rhythm makes memorization easy.  So does a good rhyme scheme.  As previously mentioned, the ballad form has long predominated, but anything with a solid rhythm and a catchy rhyme scheme is commonly accepted.

Is That Cowboy Poetry?

One sticky question is whether only true cowboys and cowgirls can write cowboy poetry.

The stricter school of thought is that it takes a working cowboy to write about the life of a working cowboy.  A tenderfoot will never be able to properly appreciate the joys and hardships of the Western way of life and will sooner or later betray his inexperience in his poetry.

The looser school of thought is pleased to recognize an appreciation of the West wherever it can be found.  So the poet only rides in his imagination?  Well, at least he showed his love for all things Western.  After all, some of the earliest writers of cowboy poetry were Easterners who never worked cattle in their lives.

The result of this diversity of thought on and approach to cowboy poetry is an equally diverse genre.  Cowboy poetry, one might say, is the poetry of life, life in the West in particular.