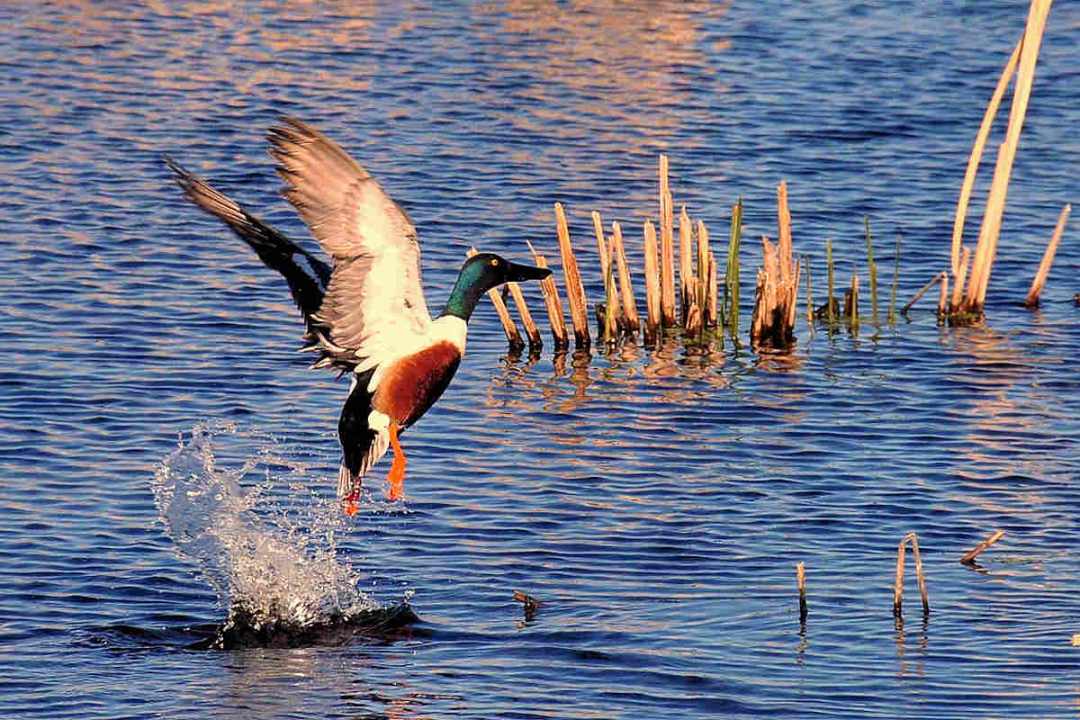 The northern shoveler (Spatula clypeata) is named for its odd-looking bill, accentuated by a sloping forehead. Although this appendage makes the duck look slightly ridiculous, it has its uses. Over 100 bristles line the edges of the bill. The result looks and acts something like a comb that the shoveler can use as a filter when eating.

But keep in mind that the male shoveler has other interesting field marks to note. His eye is yellow, his head is dark with a green gloss, his back is dusky, his sides and belly are reddish brown, and his tail coverts are black. This pattern, however, is broken by white on the breast and flanks. Be aware that most of these features are visible only in good lighting; on a cloudy day or when seen from a distance, the northern shoveler may simply look black and white.

The female, as would be expected, is more subtle in appearance. Field marks to note include a mottled orange bill and a white belly.

Young males can look confusing while they are transitioning to adult plumage. At first, they look more or less like the female. With time, however, dark feathers start to show up on their heads and necks, giving them a strange mottled look. They will often (but not always) display reddish brown on the belly.

All northern shovelers share some characteristics that can be seen in flight. They have blue shoulder patches, sometimes with a gray cast in females, and they have green speculums bordered with a thin stripe of white. Their bulky bills create the impression that they are either front-heavy or built with their wings set far back on the body. But don’t let this strange appearance fool you—shovelers can fly with all the speed and precision of smaller teal.

Northern shovelers are unusually quiet ducks. The male gives a low took note in social settings, which becomes a braying paaay-took-took during courtship. The female quacks, particularly during courtship season, when being pursued by a male other than her mate, and just before laying an egg.

You may notice a rattling sound when a group of shovelers takes flight. This is not a vocalization, but a noise made by their wings.

Northern shovelers can be found abundantly throughout much of the year in parts of Kansas, but particularly the western two thirds of the state. They migrate from March until May. At this time, they congregate around just about any shallow body of water they find, from ponds to wetlands. Some occasionally stay to nest, particularly in the Arkansas River Lowlands and High Plains regions. Fall migration may begin as early as July, but does not reach its peak until early November. However, some of these ducks will winter in Kansas, particularly on the southern border, as long as they can find open water.

The northern shoveler prefers small flocks in the spring and large groups in the fall, when it is likely to be found with blue-winged teal. These flocks can coordinate their movements extremely well, leaping into the air in unison and feeding together in a pinwheel pattern.

The unique bills of these ducks let them feed in unique ways. Unlike some of the other dabbling duck species, shovelers rarely tip over to eat. As they swim, they skim the water for seeds and small invertebrates, particularly crustaceans. The northern shoveler’s diet may consist of as much as 30% animal food, which is unusually high for a dabbling duck.

The courtship displays of the northern shoveler include braying calls, wing flapping, and exaggerated head dipping. Most shovelers have one mate per breeding season, but occasionally one female will bond with two males.

The female shoveler scrapes a nest in the ground wherever she can find sufficient shelter, whatever distance that might be from the water. She then lines it with grasses, dried weeds, and down. She may lay as many as 19 eggs, but 8 to 12 is more common. The eggs are some shade of green, ranging from buffy to grayish. The female incubates the eggs for three to four weeks.

When the ducklings hatch, observers might not be able to recognize them as shovelers because they lack the distinctive bills of the parents. Their tiny bills look just like those of other ducklings, but are unusually pliable—if you held one in your hand, you could bend its bill in any direction. These young ducks can leave the nest in just a few hours after hatching, usually making their appearance in mid-July in Kansas. The female cares for them until they are able to fly at up to two months of age.

Birdwatchers may be able to attract northern shovelers by building ponds.

Mallard
Both male and female mallards bear a superficial resemblance to their shoveler counterparts. The bill is a giveaway, however. Also, no mallard displays a blue shoulder patch. For extra confirmation, look at the male duck’s sides. Mallards have light sides and a reddish breast—the reverse of the shoveler’s pattern.

Blue-Winged Teal
The blue wing patch can cause confusion in this case, but again the bill shape is diagnostic. Also note the male teal’s leopard-spotted body and crescent-marked face. The female teal’s bill is dark, unlike the mottled orange bill of the shoveler.

Northern Shoveler
Photos, audio, and more information from Cornell’s All About Birds site.

The Simple Art of Napkin Folding