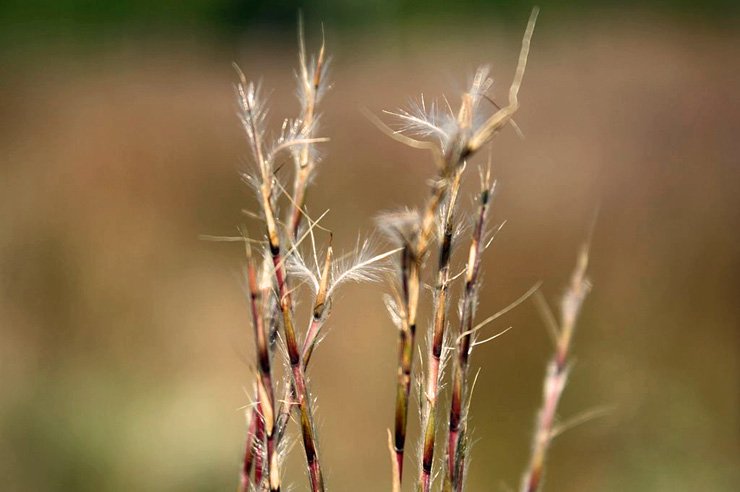 Although it shares the waxy bluish-green stem of the famous big bluestem plant, the more humble little bluestem (Schizachyrium scoparium) has few other similarities in appearance. It only grows two to five feet tall. The upright, slightly flattened stems often branch.

The leaves are less than 1/4 inch wide, but they vary from 2 to 12 inches in length. The blades may bend or roll backwards as they mature and taper to sharp points. They tend to feel a little rough to the touch near the sheath, but are smooth throughout the rest of their length. The sheaths are short and typically smooth. Inside the sheath is a fringed membrane known as the ligule.

The inflorescence is a single raceme, an arrangement in which the spikelets grow on a short stems called pedicels. The raceme of the little bluestem is one to three inches long and consists of spikelets growing in pairs on a flattened pedicel. In each pair, one spikelet is fertile and the other sterile. The fertile spikelet bears a unique hairy, curled awn which gives the entire seedhead a white, fuzzy appearance.

Below the ground, little bluestem boasts roots ranging from five to eight feet long. It grows short rhizomes, as well.

Little bluestem can be found across most of the United States, where it is native, but it is particularly common in the Great Plains states of Kansas and Oklahoma. It is the only native grass species that can be found in every Kansas county, as it is adapted to tallgrass, mixed, and shortgrass prairie ecosystems alike. Because little bluestem is such an important prairie plant across all of Kansas, it was declared the state grass in 2010.

Within its wide range, little bluestem is typically found on drier sites, particularly on top of ridges and hills. It can adapt quite well to poor soils, including those that are shallow, rocky, or low in fertility, and it can stand some salinity. It can even tolerate the partial shade of open woods, as long as the soil is well drained. It requires a soil pH of 7.0 or slightly higher.

Little bluestem is considered to be adapted to USDA hardiness zones 3 through 9.

This species is a perennial warm-season plant. It starts growing in late spring, primarily from seed but also through the production of shoots (tillers). It may even grow from rhizomes where soils are a little more moist.

Hot, dry summers do not trouble little bluestem at all. Its deep root system keeps it going through drought. This helps it to flower and produce seed from July through September.

Little bluestem season ends with frost. After the frost hits, the leaves and stems turn reddish. The stems typically remain standing upright throughout the winter, however, regardless of snow.

This native plant is a very important protector of the soil on the prairie. Its roots keep soil locked down and secure from the wind. Also, its stems hold rain and snow close to the ground, allowing moisture to be absorbed instead of evaporated. Thus, little bluestem may be an important key to conserving groundwater in some regions. Finally, when the old stems and leaves die and decay, they add considerable amounts of organic matter to the soil.

It is difficult to imagine a prairie ecosystem and all of its associated wildlife without little bluestem, as so many animals depend on it for food and shelter. Its sturdy, upright stems protect many species of caterpillars, sometimes over the winter. Birds ranging from prairie chickens to diminutive grassland sparrows depend on the seeds for food, while meadowlarks nest on the ground under its protective canopy. The large grazing animals of the past, such as bison and elk, once relied on little bluestem forage; it is still a preferred food of other mammals such as antelope.

Little bluestem is an economically important forage plant, particularly in the Flint Hills. When young and tender, it offers superb nutrition and impressive amounts of protein to cattle and bison. Most horses will do well on it early in the growing season, as well, although sheep and goats find it coarse. Note, however, that both the palatability and the protein content of little bluestem drop off sharply from July onward. Little bluestem pasture should be seeded as early in the spring as possible at a rate of 7 to 12 pounds pure live seed per acre, either drilled or broadcast provided it is adequately packed into the soil. It is crucial to avoid weed competition during the establishment phase. This is why planting early is recommended. Do not apply fertilizer, or the weeds will take off. If weed control measures are required, the pasture can be mowed as long as the height is set above the little bluestem seedlings. If the first year goes well and the plants establish themselves, the pasture can be grazed thereafter. Subsequent management includes burning of competitors early in the spring, maintenance of three to four inches of stubble during the main grazing season, and aggressive grazing of cool-season weeds after the first fall frost. For best results, allow the little bluestem to rest and go to seed for about three months in the summer every two to three years.

This species makes fair-quality hay, particularly when included in a mixture of other native grasses. However, it requires careful management to avoid weakening the stand. Do not cut little bluestem in its first year or before it has grown to a height of eight inches in subsequent years. Leave a stubble height of at least four inches, more if necessary to avoid cutting off over 50% of the plant. Allow the field to rest for at least a month before the first fall frost.

Little bluestem is a good choice for controlling soil erosion. Plant in a mix of other native grasses, preferably by drilling. Where broadcasting is necessary, the seed should be packed firmly into the soil. This is usually accomplished by driving a bulldozer over the site in systematic passes until the whole area is covered with tracks.

Gardeners find little bluestem an aesthetically pleasing addition to a landscape, and one that is very low-maintenance. As the seeds mature and dry out, the stems can be cut to add to floral arrangements.

Native Americans rubbed little bluestem into fiber. Evidently it made a soft, warm lining for moccasins.

Little bluestem can be mildly weedy where circumstances permit. It is not likely to be troublesome anywhere except in gardens. The seeds can only blow five or six feet from the parent plants.

Big Bluestem
These two plants are really only alike in name. Little bluestem is smaller, has thin leaves, and grows a fuzzy white inflorescence very different than the hallmark “turkey foot” of big bluestem.

Common Broomsedge
Also known as broomsedge bluestem, common broomsedge bears fuzzy seeds that may present an identification problem. However, it can easily be sorted out by a good look at the inflorescence. The seedhead of the broomsedge is partially enclosed by a yellowish leaflike structure called the spathe, while the little bluestem has no spathe. Also broomsedge seeds have straight awns, unlike the distinctive curly awns of little bluestem seeds.

The Simple Art of Napkin Folding