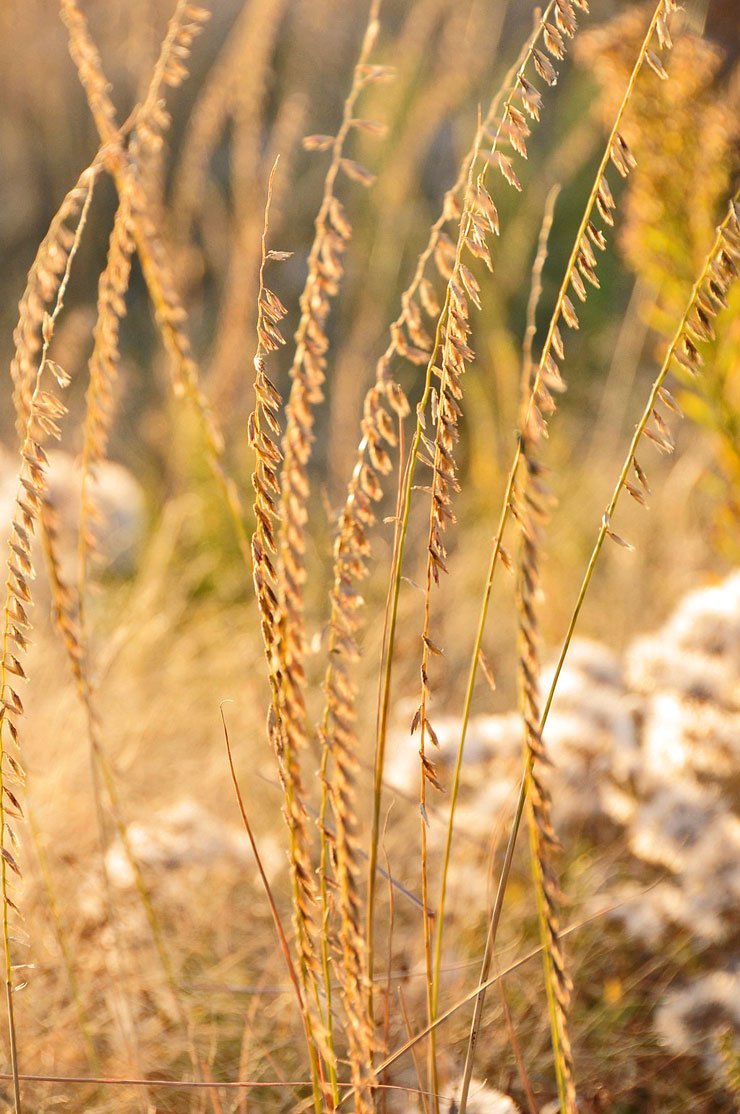 Side-oats grama (Bouteloua curtipendula) takes its name from its peculiar inflorescence. It grows a stalk varying in length from 3 to 16 inches and tending to zigzag. Somewhere between 12 and 60 very short branches grow from this stalk, dangling to one side. Each branch has three to eight spikelets resembling oat seeds, especially as they mature and fade to a tan color.

The grass plant itself is compact and clump-forming. The stems are 10 to 40 inches tall. Note the purplish color at the nodes of each stem.

This species grows many flat, stiff, coarse leaves. The blades vary between 2 and 12 inches long and are thin, being less than 1/5 of an inch in width. The top side of the leaf blade is rough to the touch. The leaf margins have hairs growing out of little bumps that look like minuscule blisters.

Also of interest is the deep, fibrous root system and very short, thick rhizomes of this grass.

Side-oats grama is among the most widespread grama species. It will grow almost anywhere east of the Rocky Mountains, except for the Gulf Coast area. However, it particularly thrives in the drier mixed-grass prairies of the Great Plains. Side-oats grama is the state grass of Texas.

While this species is adapted to most soils, it displays a preference for dry, rocky, shallow soils. It particularly thrives where limestone is the main rock. It can tolerate some spring flooding, although it likes well-drained soil and annual precipitation amounts less than 20 inches. It is tolerant of black walnut toxin and low levels of soil salinity. Its pH preference is in the moderately alkaline range.

Side-oats grama is typically associated with open prairies and sunny hillsides, but its ability to adapt to partial shade enables it to grow in open woodlands, as well.

This species will grow in USDA plant hardiness zones 3 through 8.

A warm-season perennial, side-oats grama starts its growth in mid-spring by putting out rhizomes. While it spreads rather slowly, it is vigorous once established, able to tolerate moderate drought in the summer.

Side-oats grama flowers from July through September and is pollinated by wind. It produces a moderate seed crop given enough moisture. The seeds are thought to be dispersed primarily by the wind. Most of these seeds are not viable, but any that manage to germinate go on to produce remarkably hardy seedlings.

The mature side-oats grama plant stops growing about the time of the first fall frost. The leaves change color with the season to varying shades of bronze and purple. Side-oats grama crowns are very resistant to winter weather.

This native grass has the interesting property of being present in grasslands in all stage of succession. However, it is definitely a colonizer, playing an important role in the recovery of the ecosystem after drought and overgrazing. It is usually one of the first grasses to appear in burned areas in its preferred habitats.

Side-oats grama supports a variety of other species—some good, some not so good. In wet years, it is a host of several fungal diseases, particularly of the rust, leaf spot, and root rot varieties. The seedlings are attractive to grasshoppers, sometimes to the detriment of the plant. On a positive note, side-oats grama has appeal to skipper caterpillars, as well as birds and small mammals in search of nesting material. Deer and antelope will graze it in the spring, while elk consume it year-round. The seeds provide food for many songbirds and for wild turkeys.

Side-oats grama is an important forage species in the Great Plains, whether used for pasture or hay. It is nutritious and palatable to all types of livestock most of the year, and even retains these qualities to a moderate extent throughout the winter. This species is not quite as challenging to establish as some. Burning the seedbed prior to planting is recommended for best results. Seed between January and April at a rate of three to six pounds of pure live seed to the acre. Grazing can typically begin the second year after seeding. For optimal stand health, rotational grazing and early spring burning every three to five years are recommended. Allowing the plants to produce seed every two or three years is also advised.

This species does well in conservation settings, including erosion control and wildlife plantings.

While side-oats grama may not be something you typically think of when you think of for turf, it performs quite well in this role due to its forgiving, low-maintenance tendencies. It should require little care except regular mowing to keep it at a height of two to four inches.

The unique appearance of side-oats grama makes it suitable for landscaping, particularly when paired with other native grass and flower species. (In fact, it is considered one of the easiest ornamental plants to grow in Kansas.) It will attract birds and butterflies to the garden, and it looks great when cut and dried. Cut the clumps back to the ground in late winter. Watch out for volunteer seedlings.

There are no known hazards associated with side-oats grama.

Side-oats grama is very distinctive, particularly when flowering. But even during the vegetative phase, you should be able to recognize it by the hairs on the leaf margins.