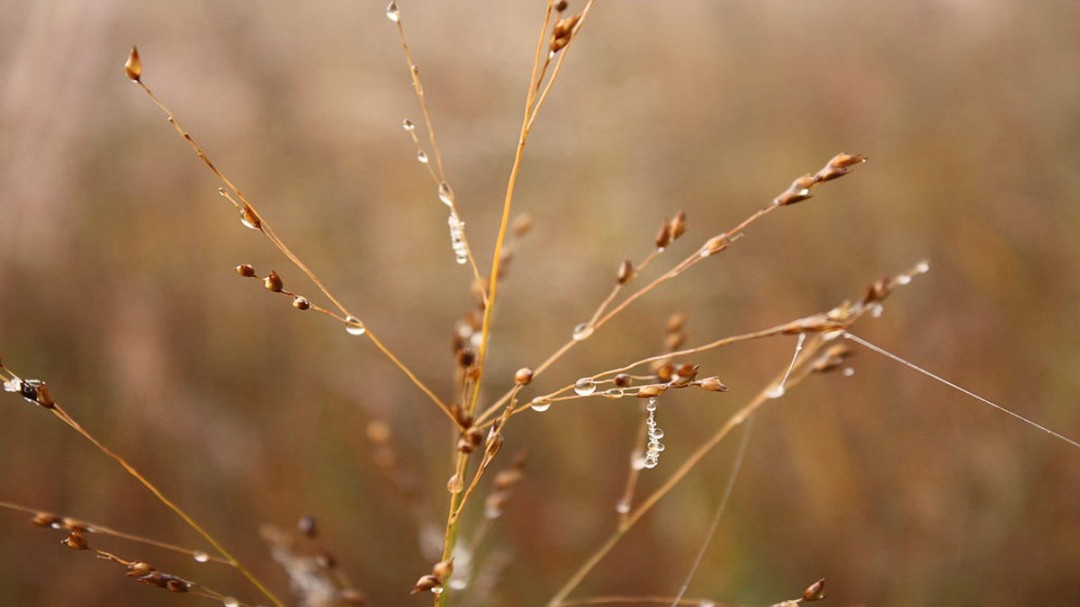 Switchgrass (Panicum virgatum) is one of the iconic grasses of the North American prairie. Firm, upright stems, usually with a reddish cast to them, lift the plant as high as seven feet tall. Below the soil, switchgrass is just as impressive, with roots sometimes reaching a depth of 11 feet.

This species grows leaves that are flat and narrow (about 3/5 of an inch wide). The leaves vary anywhere from 4 to 24 inches in length. They are characterized by a prominent midrib and a triangular patch of white hair on the upper surface near the base.

The inflorescence is an open panicle with many branches, forming a pyramidal shape between 6 and 20 inches long. The branches have short-stalked spikelets near their ends. These spikelets bear awnless seeds.

Switchgrass is a native tallgrass species of North and Central America, growing all across the continental United States except on the Pacific coast. It can be found nearly anywhere in Kansas.

This species is incredibly adaptable. It can grow in most habitats from open woodlands to lowland prairies to sand prairies due its tolerance of all but the wettest and driest soils. Wherever full sunlight can penetrate, there switchgrass will thrive. Unfortunately, switchgrass is vulnerable to tillage, overgrazing, fire exclusion, and competition with introduced forage species.

Switchgrass is a warm-season perennial. It is usually one of the first warm-season grasses to appear in the spring, but its major burst of growth occurs from late spring into early summer. Although it slows down somewhat in the heat of summer, it is quite drought-hardy and will continue to grow during the dog days.

This plant usually flowers beginning in August and continues into September. As fall progresses, the foliage turns a brilliant orange. Because the stems are very sturdy, switchgrass remains standing throughout the winter, even in areas with heavy snow.

Switchgrass is one of the dominant plant species of the tallgrass prairie, and it alone accounts for much of the natural soil-building that occurs on native prairies. Few grasses can produce the organic matter that switchgrass does.

In addition to its all-important soil-building role, switchgrass promotes a healthy prairie ecosystem through its interactions with animals. Many birds and mammals rely on its height to shield their young during the growing season, while pheasants, quail, and rabbits continue to use it for shelter in fall and winter. Grasshoppers and leafhoppers eat the foliage, while both gamebirds and songbirds rely on the seeds for food.

Due to its nutrition and palatability, switchgrass is an excellent warm-season pasture for cattle prior to its maturity. Planting it for pasture requires killing off the weed crop with aggressive tillage, mowing, or grazing. Switchgrass can be drilled at a rate of 6 pounds pure live seed (PLS) per acre and a depth of 1/4 inch, or it can be broadcast at 8 to 10 pounds PLS per acre, then rolled afterward to cover the seed. An annual mowing in late spring or early summer is necessary to control weeds prior to establishment, but grazing is not recommended until the second or third year. Subsequent maintenance involves grazing starting when the grass reaches 12 inches in height and ending when it is down to 8 inches. Long rest periods of 30 to 60 days are recommended, as is burning every 3 to 5 years to control weeds and stimulate growth.

Switchgrass can be used either as hay for livestock or as a substitute for wheat straw in animal bedding or mushroom farming. Cut when when the seedhead just starts to emerge (late boot stage). Switchgrass can usually be cut twice a year, but always be sure to leave at least 8 inches of leaves and stubble in the fall so that the plants will survive the winter.

This native species is very effective in erosion control projects, making it a good choice for reclaiming anything from roadsides to strip mines to sand dunes. For this purpose, it is generally best to seed it in a mix with other native plants.

The height of switchgrass gives it a place in gardening, whether it is as a striking back border in the home landscape or as a windbreak in a market garden. Scatter the seeds over a prepared seedbed in the spring as soon as the soil has reached 60 degrees and is workable. Keep the seeds watered until they germinate and the seedlings become established. Be patient, as this species is very slow to germinate. Once it takes hold, however, it will do a fine job of taking care of itself with no further care other than being cut back in the winter.

Switchgrass is a potential fuel source due to its high biomass production and high cellulose content. It can be distilled into ethanol, manufactured into fuel pellets, or burned for power production. As an added bonus, it requires virtually no maintenance, unlike corn. However, switchgrass grown for fuel should never be harvested more than twice a year.

Switchgrass can become a troublesome weed in some areas.

Switchgrass displays a triangular patch of white hair near the leaf base even when young. This characteristic can be used to distinguish it from all other warm-season grasses.