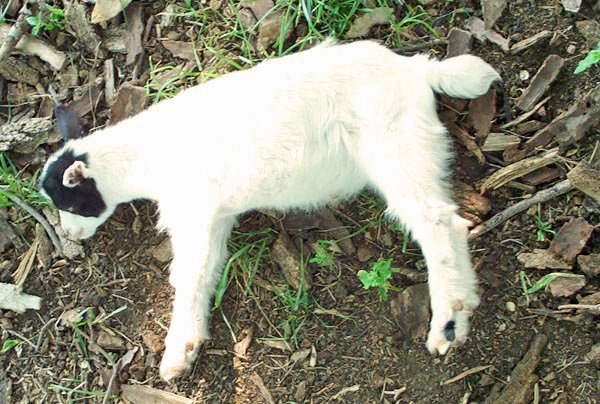 The Tennessee Fainting Goat goes by many names—Myotonic Goat, Nervous Goat, Wooden Leg—and receives its claim to fame from its strange habit of falling down stiff when startled. As befits its status as a strange curiosity among goat breeds, it traces back to a small herd owned by a man who was a strange curiosity himself. This man was John Tinsley.

Tinsley was an older man when he showed up in central Tennessee in the early 1880s. No one knew for sure where he got his peculiar accent, but he was believed to have traveled in from Nova Scotia. Besides the hallmark beret he wore, Tinsley brought with him a “sacred cow” (probably some sort of a zebu) and four goats with a tendency to collapse when alarmed. The fame of these goats soon traveled throughout the area, and a Dr. H.H. Mayberry offered to purchase them. Tinsley refused at first, but finally acquiesced and took $36 in exchange for the four. He and his zebu disappeared without a trace soon afterwards.

Mayberry bred the goats (one buck and three does) as novelties for a while and quickly discovered that their habit of fainting was hereditary. The Fainting Goats also proved their abilities as low-maintenance meat animals—they had abundant muscling, they were too stiff to escape confinement readily, and they could reproduce at an impressive rate. Mayberry had no difficulty selling his goats across Tennessee and Kentucky. By the mid-1900s, the breed had spread as far as Texas.

Unfortunately, not all of the Tennessee Fainting Goats were bred pure, as crossbreeding was considered the technique of choice for breeding meat goats. No sooner had the breed spread across the South than it began to dwindle in numbers.

In the late 1980s, the Tennessee Fainting Goat’s potential both as a meat breed and as a novelty brought it back to the attention of goat breeders. Although still quite rare, it is enjoying a slow increase in numbers and geographical distribution, albeit in two forms. The Tennessee version is bred primarily for conformation and extreme stiffness, while a Texas variety has been selected strictly for production traits, such as fast growth, heavy muscling, and high fertility. These two types are already considered separate breeds by some, and it seems quite possible that the breed will eventually split.

Fainting Goats are mainly kept for two purposes: meat production and the novelty factor. While either the Tennessee type or the Texas type can be kept for either role, the former excels as a unique pet and the latter as a meat animal. Note, however, that due to the current scarcity of the breed, purebred Fainting Goats are typically not slaughtered. Instead, the bucks are crossed with Boer does to produce meat goats.

On a small homestead, the Fainting Goat can find other roles, as well. It can produce milk in small quantities, and a few can produce cashmere fiber (note that a long-haired goat is needed for this purpose).

Fainting Goats are also used to study myotonia congenita. This disease causes muscle stiffening in humans as well as goats.

Tennessee Fainting Goats have winning personalities, being smart and spirited, but at the same time sweet and gentle. Their calm, affectionate nature makes them safe family goats.

Because their stiff muscles prevent them from climbing or jumping to any significant height, these goats are very easy to contain.

The mothering instinct is strong in the Fainting Goat breed. Does can be trusted to bond with their kids without assistance. In fact, despite the fact that newborn kids of this breed are active right from the start, they may be difficult to find, as the does prefer to hide them for a few days.

The Fainting Goat is known for hereditary myotonia congenita, a condition in which the skeletal muscles lack adequate chloride channels, important for bringing muscles back to their resting positions. So while the goat’s muscles can readily contract, they are slow to relax after a quick movement. When this contraction occurs in the legs, they become stiff and the goat may be caught off balance and fall over. “Fainting” is a misnomer, as the goat remains completely conscious during the spell of stiffness. While myotonia may make the goat more vulnerable to predators, the frequent muscle contractions result in very strong bones and muscles, and do not appear to cause pain or a shortened lifespan.

Note that Tennessee Fainting does mature slowly and should not be bred until they are physically up to the task (at least 16 months of age). Also, be aware of their small size and do not breed them to bucks larger than themselves. When crossbreeding to the hefty Boer for meat goats, use a Tennessee Fainting buck and Boer does to avoid difficult births.