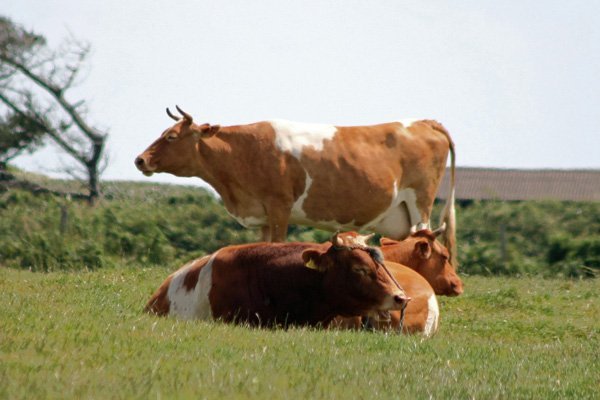 As its name suggests, the Guernsey cow comes from the Island of Guernsey, one of the Channel Islands located off the coast of France. Much of the breed’s earliest history is speculative, but the most common theory points to France for the breed’s origins.

This theory suggests that there were several breeds of French cattle, some of which had arrived there after a long journey from the Middle East via North Africa and Spain. The Guernsey has a unique type of beta casein in its milk, which would point to the Middle East for its ancestry. Some of the Middle Eastern cattle probably arrived in Brittany and came to the Channel Islands in A.D. 960 with a group of monks.

The rich-milking cattle from Brittany were later influenced by more French cattle brought by more monks sometime in the 11th century. The new stock, a variety of the Normande breed, were also known for large quantities of high-quality milk. The two breeds mingled over the years, isolated from outside influences by the waters of the English Channel. The Guernsey was the result.

The first recorded importation of Guernseys occurred sometime around 1830, when a schooner captain named Prince took two heifers and a bull to his home in Boston. Another captain named Belair brought three cows to New York around the same time. These two importations introduced America to the Guernsey, and the breed quickly became a favorite, first as a family cow, then as a supplier of milk for dairy businesses. More importations followed between 1850 and 1880.

At first, these cattle mainly found homes in the New England area, but their golden milk caught the attention of dairymen from across the country after the breed appeared at the 1893 World’s Columbian Exposition in Chicago. Before long, the Guernsey was the dairy cow of choice, following Admiral Byrd to Antarctica and supplying American cities with nutritious milk. Their popularity rose to a peak from the 1950s to the 1970s, but by 1970 a new trend was beginning—mass production of Holstein milk. Although Guernsey milk was far superior in quality, no breed could outstrip the Holstein for gallons of milk per lactation.

Although the Guernsey is still one of America’s favorite dairy breeds, its fortunes have not recovered since the Holstein phenomenon began. In an effort to compete, some breeders are upgrading their Guernsey herds with the red-and-white variety of Holstein to increase production. Meanwhile, inbreeding increases as the breed’s numbers decline. It would appear that the Guernsey is currently caught between two conflicting trends—increasing milk yields to meet the needs of commercial mass production and preserving traditional characteristics to fill the demands of an increasing number of small farms. How the conflict will be resolved in this breed remains to be seen.

The Guernsey is primarily a dairy breed, one of the favorite choices of self-sustaining family farms and direct marketers of grassfed dairy products. The composition of Guernsey milk is ideal for making cream, butter, cheese, and yogurt. Interestingly, it is also just right for making a stable foam in specialty coffees.

Because the breed has many desirable characteristics, it is a popular choice in dairy crossbreeding programs. For instance, a Guernsey can be crossed with a Holstein to improve the temperament, calving ease, and milk components of the offspring. It can be bred to a Brahman or other zebu-based breed to produce a heat-tolerant dairy cow for tropical climates. It can also be crossed with any beef breed to raise beef calves.

Draft work is a less common use of the breed, but its steady temperament makes it a good choice for beginners.

Guernsey owners love the rich personality of their cows. They are kind, gentle animals with cheerful dispositions. Although Guernseys are not given to passionate outbursts of affection, by the same token they are not prone to fits of irritability, instead forming a quiet bond with their owners. They are intelligent cattle that pay close attention to their surroundings, although they do not spook easily.

Some Guernseys do have a domineering streak, but they rarely direct it toward a gentle but firm owner. Instead, they seem to take it out on the other cattle in the pasture.

Bulls, however, are another story. Most dairy bulls are notoriously aggressive, and the Guernsey bull is no exception.

Although Guernseys are not as frail as commercial Holsteins, they are still prone to a variety of health problems ranging from lung problems to udder infections. Calves in particular tend to be delicate. Some of these problems are probably due to the increase of inbreeding in this breed.

Owners should also be aware that the Guernsey reaches puberty at a young age. Heifers should not be bred too early, or they may injure themselves by producing too much milk. They can safely have their first calf at around age two.

Choosing a Breed of Cattle
Is the Guernsey right for you? This book will help you assess your five needs and make that decision. Includes a brief profile of the Guernsey breed. Free sample pages are available here.

The Jersey, Alderney, and Guernsey Cow
An old book in the public domain. Includes the history of Channel Island cattle, as well as information on how to select, feed, house, breed, and milk a cow.